Dr. Amit Nath is awarded the Degree of Doctor of Business Administration at a reputed event at Taj Palace, Delhi for his expertized achievements in virtual closing 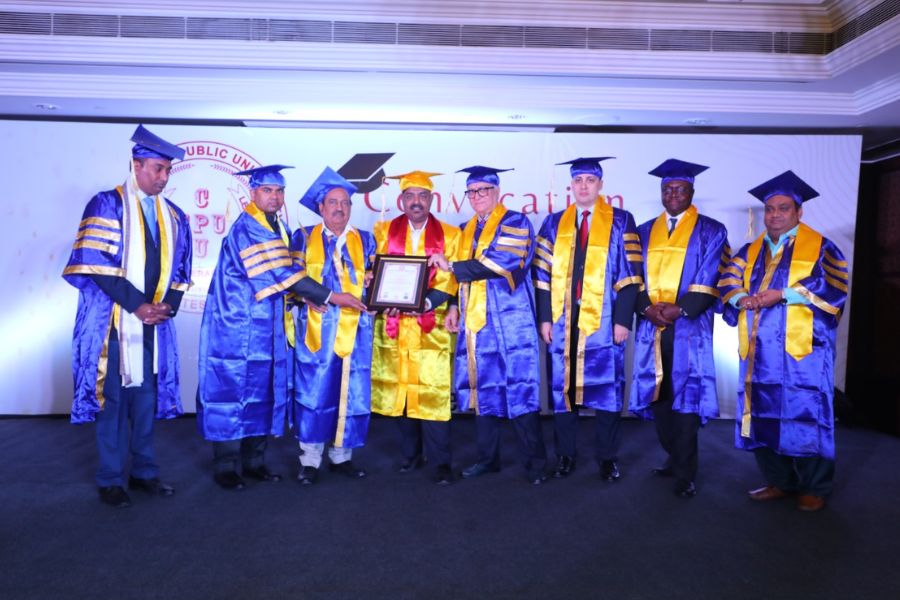 November 29: The expertized aura of Dr. Amit Nath got honored with the double doctorate in November for his excellent performance in the virtual closing. The award was for outstanding service rendered and research on the conservation of traditional Indian Vedic Business science on business strategy, marketing, sales, training and closing, etc.

It is a Doctor of Business Administration, which is beyond the normal doctorate or Ph. d that Mr. Amit Nath received. The Doctorate Convocation Ceremony held on 25th Nov 2022, Friday at Hotel Taj Palace, New Delhi.

This Event is related to the California Public University – Doctorate, where a total of 27 people were nominated. Mr. Amit Nath, Founder, and Director of Virtual Closer & Amkan were the only candidate nominated for DBA from India for 2022-23 under CaliforniaPublic University.

The Felicitation was moderated by Former Miss India Simran Ahuja from Mumbai. The other Jury members were the governor, Vice-chancellor, president, and representative of different institutions under the University from the US, Australia, Sri Lanka, Afghanistan, Ghana, Kenya, New Zealand, Nepal, and others.

An oath of conduct was also undertaken in the Affirmation of the members of the university and also the representatives and dignitaries.

Dr. Amit Nath is from Bangalore. Long story short, he typically teaches people, how to close deals via his earned expertise in the field.  Mr. Nath is working for around 20 years and also owns multiple companies, where his CEOs run these organizations. It’s privileged that he is placed as a top-ranked copywriter in India for the last 8 years based on his result-oriented skillset.

As far as his awards are concerned, he has got honored by multiple places including the Times of India. He has made the record of selling multiple Mercedes cars in a single month of leadership by using just two paragraphs of a copy.

Currently, he is helping an assorted group of CEOs, entrepreneurs, and EXOs to learn about how to close high-value deals. For other people, he guides them on how to close the deal even on a phone call. This entire system is recognized by him as High Network Influencer Virtual Closures (HNIVC).

He is introducing himself as more of an undercover agent under a qualified individual, who is connecting him with the other side party, and excellently he closes the deal over a phone call. He closes the deal with an affordable percentage of his/her happiness. He receives capital-free money from this risk-free business despite the location via the phone. Even in such conditions, your time is also saved with no internet connection.

Mr. Nath has gained a strategic approach the deal closure that he inculcates in his teachings which can further make individuals close multiple deals in a couple of hours per day with plenty of spare time left to invest in other quality matters too. With such sharpened skills, one can earn more than enough to get the hassle-free lavish lifestyle ahead without much hectic.

This process is called virtual deal closing, which is still unique that even not present on the re-known platforms such as monsters, indeed, etc. These people are highly trained in the common crowd as undercover agents without coming to the top layer with an introduction.

Fortunately, he is the only company, that trains people and makes them employ him as a partner with a 50-50 deal. They have a flexible schedule to get engaged on a call and crack the deal. They work together with him to close more deals and get extra bucks to them instead of working for the employers who are providing enough work on compromising rewards.

He has done multi-crore deals just on a phone call. He is a man of values and instead of keeping his valuable knowledge limited to him, spread his expertise to get a satisfied and happy gathering of people around you as a part of mutual happiness to have a win-win situation at last.

He shares further that he has not found any business except this where there is 100 percent happiness whether it is employer, employee, customer, bank, prospect, or anyone involved.  There are a couple of years he has been trading in 13 to 14 countries with many trustworthy experts.

People can have faith in algorithms, machines, etc. but don’t trust each other in such an advanced technological era. There is a disbalance in population and the vacancy for jobs. The scarcity of jobs will give rise to slavery, scams, robbery, etc. Virtual closure helps people to get employment with freedom and indirectly so many families will get a better lifestyle.

His Marathi teammates more than 3 and a half lakh are calling him dada which means brother. He has the motto you can walk with me but not before or after me. He created this amazing family that is celebrating a festival of every day of happiness consistently. He has created a program called “Fest “and extracted the name from the festival. The evil in the fest is poverty, which will not let you celebrate the festival with an empty pocket.

So, how do you feel when your pocket is laid with wholesome wealth every day via strategy and technocrats? Once you understand the basics of virtual dealings, the sky will be the limit for you!

Mr. Nath’s work is recognized after so many years. He is in high demand because many companies have a lot many advertisements, leads, and marketing campaigns but no business at last. After all, conversion is the most important part that is missing. This last part of the deal is done by him and his team and they close the deal effectively. So, now many people understood the value of their work and in September he received an award for Best Emerging Coach For Unique Business Model and now the biggest degree of a double doctorate also came in his lap.

If you have any objection to this press release content, kindly contact pr.error.rectification@gmail.com to notify us. We will respond and rectify the situation in the next 24 hours.